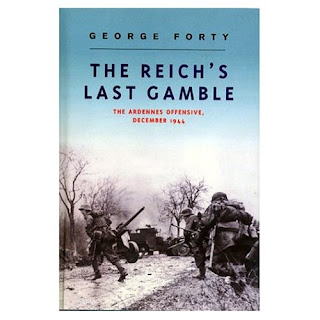 "The Reich's Last Gamble" by George Forty, Cassell & Co.,
The German Ardennes campaign of December 1944 – the famed “Battle of the Bulge” – still exerts a powerful fascination on military historians. It was of profound significance in both military and strategic terms. As Germany’s final major offensive of World War Two, it was devised, at worst, to stall the Anglo-American advance in the west. At best, it was to force a separate peace that would split the Alliance and allow Germany to concentrate on its primary ideological enemy – the Soviet Union. In the event, it did neither.
On paper, the Ardennes Offensive bore the mark of genius. It was envisaged as a swift mechanised advance north-west, through the Ardennes forest, with the main objective of seizing the Allied supply depot at Antwerp. The Ardennes was an inspired choice. A region of bleak wooded uplands scored by narrow and sinuous valleys, it was considered to be wholly unsuited to the requirements of modern warfare, despite being the scene of Rundstedt’s decisive breakthrough in 1940. Accordingly, it was only lightly defended by untried and recuperating US troops.
In the vanguard of the attack were two elite units. One, the Kampfgruppe Peiper, formed a rapid armoured spearhead aiming to seize the strategically vital bridges over the Meuse. It would later carry out the Malmédy massacre of 86 captured American soldiers. The other, the 150th SS Brigade, was commanded by the infamous Otto Skorzeny; liberator of Mussolini and ‘the most dangerous man in Europe’. Largely English speaking and equipped with looted US uniforms and equipment, its task was to sow panic and confusion behind Allied lines. These two were followed by the troops of 5th Panzer, 6th SS Panzer and the 7th Army.
Yet, despite the ingenious planning, the Ardennes Offensive failed. By Christmas, after barely ten days fighting, it had stalled. Starved of ammunition and fuel and lacking air support, German troops failed to achieve the breakthrough necessary for a repeat of the Blitzkrieg of 1940. Antwerp was never reached. The enemy had been underestimated. Allied lines had buckled but held. After the initial shock, the Americans had recovered their nerve, and their legendary defence of the key points of St. Vith and Bastogne would contribute to what Churchill termed “the greatest American victory of the European War”. Germany lost 120,000 men and over 600 tanks. But more importantly, she also lost the ability to wrest back the military initiative. Her army had been disembowelled on the Eastern Front, but the Ardennes delivered the coup de grâce. Hitler had gambled and lost.
George Forty is well placed to write about such matters. He is a veteran of Korea, Aden and Borneo and director of the excellent Tank Museum at Bovington in Dorset. He has also written on almost all aspects of armoured combat in World War Two. This book is commendably thorough and well-researched, and combines memoir accounts and military reports with some skill. It has excellent illustrations, numerous clear maps and informative appendices. It amply demonstrates the author’s excellent knowledge of his subject. And yet, something is lacking.
There are some minor irritations. Forty bases his account primarily on American memoir sources and would benefit from a more balanced use of German accounts. He also shares the military’s eternal fondness for acronyms, but he leaves many of them unglossed, leaving the reader to guess their meaning. OKW and GOC are OK, but any suggestions for POL and ETO?
But there are also deeper failings. Considering the excellent subject material – all daring, death and derring-do – the narrative is curiously flat and unengaging, too “text-book like”. It is a good example of traditional military history writing: earnest and thorough, but rather too sober to carry any wide appeal. In contrast to more recent publications of the genre, Forty’s soldiers do not come alive on the page. They do not elicit sympathy or disgust. One does not cry for them, laugh with them or feel their pain. This may seem petty, but such things draw the reader in and seduce him into turning the next page. They spell the difference between a good book and a bestseller. Forty’s work is admirable as far as it goes, but military history writing has moved onto a higher plane in recent years. And one has to conclude that Forty has not moved with it.
Posted by historian at large at 04:37 No comments: