Leipzig and Wroclaw - a curious symmetry

Been a while - apologies.

I spent this last week on two trips to Central Europe - on Friday flying to Wroclaw in Poland (the former German 'Breslau') for a conference, and then to Leipzig to do some filming for a documentary. In the short time that I had for sightseeing in both places, the symmetry between the two hit me - Napoleon.

Firstly, in Wroclaw, I returned to the city's stunning Hala Stulecia (or 'Centennial Hall'), which has just been completely renovated. 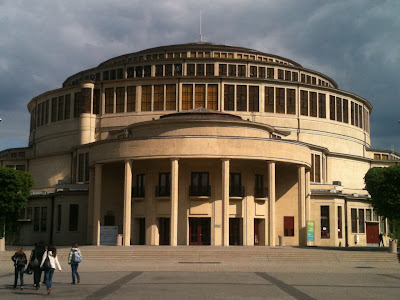 I have written about the Hala Stulecia before - http://www.historytoday.com/roger-moorhouse/wroclaw%E2%80%99s-concrete-controversy - It was originally built in 1913 to commemorate Germany's Wars of Liberation against Napoleon; events in which Breslau played a central role, being at the very forefront of events.

The Hala - which was an impressive early example of the use of stressed concrete - survived the war, was renamed as the "Hala Ludowa" ('People's Hall') by the incoming

Polish communists, and then became something of a cultural battleground after 1989, with some arguing that scarce finances should not be wasted on 'German monuments' to a conflict in which the Poles, famously, fought on the other side. Fortunately, cooler heads prevailed, and the Hala was treated to a thorough-going renovation, which - commendably - has brought it closer to the original vision of its architect, Max Berg, than it has ever been. The result is quite spectacular. 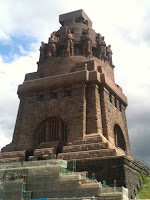 Then to Leipzig - and, after filming was done, I had a couple of hours to spare so I set off for the Volkerschlacht Memorial - Leipzig's most famous historical monument. It is indeed impressive. 300 feet high, with granite facing to concrete innards, it was also completed in 1913, this time as a memorial to the "Battle of the Nations", of October 1813, just outside Leipzig, in which Napoleon's forces were defeated by an alliance of Germans, Russians, Prussians and others.

Unlike the Hala Stulecia in Wroclaw - the Leipzig Monument is intended exclusively as a memorial, and so contains some quite remarkable statuary, including a crypt

surrounded by an honour guard of 24 granite soldiers with heads bowed standing before stylised 'death masks', and above that, four 10 metre high statues, depicting the historic 'qualities' of the German people: bravery, faith, self-sacrifice and fertility. Its all very unusual and rather remarkable.

In my mind, I had never linked the two buildings. But, for all their differences in style and concept - the utilitarian Centennial Hall and the maudlin Volkerschlacht Memorial, they are nonetheless inextricably linked. Both were pioneers in the use of concrete, of course, and both were imbued with the nationalist, jingoistic spirit of the age in which they were built.  But - though they are now in different countries - they both stand as memorials to the moment when Napoleon faltered, when his reign as overlord of Europe crumbled - a moment whose 200th anniversary is looming.
Posted by historian at large at 04:03 3 comments: