Goebbels – propaganda minister of the Third Reich – still fascinates. The diminutive genius behind the Nazi manipulation of the German masses, he is recognised as a key player in the establishment and maintenance of Hitler’s power. As such, he has already been the subject of a number of biographies; most recently by Ralf Georg Reuth from the early 1990s, so one has to ask whether we really need another study of the man.

Toby Thacker would argue that we do. Crucially, his new biography is the first to be written since the entire set of Goebbels’ diaries has been published. He was an enthusiastic diarist and wrote many volumes between 1923 and his demise in 1945. After the war, many of those diaries were considered lost, and only re-emerged from ex-Soviet archives in 1992. Now published in German, they encompass 30 volumes, the last of which appeared in 2006.

The picture that emerges from Thacker’s study conforms in many ways to the stereotype. It presents Goebbels as a powerhouse of a public speaker, with a sarcastic, razor-sharp wit, a man who, for all his intellect, seems occasionally to have had his brains in his scrotum. But there are important differences. Rather than a cynical opportunist eagerly leaping on the Nazi bandwagon, for instance, Thacker’s Goebbels is a man motivated by profoundly-held convictions – faith in Hitler, nationalism, anti-Semitism and his own brand of völkisch socialism.

Thacker’s reassessment is convincing and welcome. But though he tells us that Goebbels was generally reliable and candid in his diary – even recording his sexual liaisons in numerical code – it is hard for the reader to forget that his subject was one of the greatest dissemblers, manipulators and pedlars of lies in history. Seen in this light, Thacker’s reliance – arguably his over-reliance – on those diaries appears questionable.

Most importantly perhaps, Thacker’s subject never really comes to life. Goebbels was one of the most colourful and controversial of the senior Nazis; a genuine intellectual among a top echelon of cranks and imbeciles, he was also a depressive and a philanderer. He was a man who was loved and loathed by his contemporaries in equal measure and about whom commentators habitually resorted to adjectives such as ‘Mephistophelean’, ‘fanatical’, even ‘vile’. Yet, for all that, he comes across here as curiously two-dimensional, stripped almost of those traits and excesses that make him so fascinating.

The author is not helped by his rather pedestrian approach, in which even the highlights of the narrative – the ‘seizure of power’, or the ‘Total War’ speech, for instance – barely seem to merit any special emphasis or dramatic treatment. He has sought to be comprehensive, which is laudable, but he has done so at the expense of a more selective and imaginative assessment.
Thacker has produced a solid biography. Aside from occasional lapses, he writes well and his research and academic merit are undeniable. Importantly, he also offers the reader a number of important new contentions and insights. But, for all those positives, it is hard not to conclude that he would have benefited from a dash of his subject’s devilish imagination and diabolical flair.
Posted by historian at large at 13:04 1 comment: 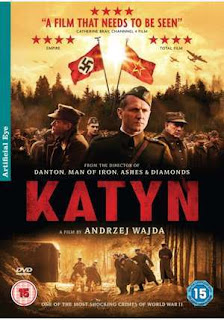 I finally got around to seeing "Katyn", Andrzej Wajda's film about the infamous massacre of Polish POWs by the Soviets in 1940 and the battle for truth that followed.
For those who know little about this subject, Katyn is perhaps the touchstone of modern Polish history. It is not so much the bare facts of the massacre of 22,000 of the nation's finest officers, intellectuals and aristocrats that serves to elevate the event to this status, rather the fact that the subject was strictly taboo under the Communist regime, and was only admitted by Moscow in 1990. Not only was a generation of Poles greivously wronged, therefore, they were also condemned to an embittered silence.
And, as if to add the most painful of ironies, it was whilst commemmorating the massacre that the Polish president and his entourage died in a plane crash in Belorussia last month. In remembering the massacre of the Polish elite, the Polish elite met its death. Therein, one is tempted to suggest, is Polish history in a nutshell.
Wajda's film is a complex affair. Beautifully shot, it follows the tribulations of a family directly affected by the massacre. Andrzej, an ambitious young Polish officer, is in a Soviet prison camp in 1939 waiting for transport to an unknown fate, when he is visited by his wife, who tries to persuade him to leave with her for Krakow. He refuses - citing the oath that he has made as an officer - and is duly deported to meet his destiny.
The film then jumps to 1943, when news of the massacre breaks with the Germans (who have discovered the mass graves) pinning the blame on the Soviets. Further jumps take us to 1945, when the incoming Soviet regime blames the massacre on the Germans and is brutal in maintaining their version of the truth.
In the middle of this battle for truth are the Polish families of the Katyn victims, whose reactions neatly encapsulate what one might call the Polish condition - on the one hand seeking pragmatically to swallow one's principles to work with the new regime, and on the other the romantic impulse to fight for what one knows to be right, even if it should mean hardship and death.
It is a complex film, full of nuance, oblique references and characters that seem to appear out of nowhere. To the non-Polish viewer, therefore, it might all seem rather bewildering - a reaction not helped by having to decypher subtitles. Yet, one must remember, perhaps, that Wajda is not making his film for the international audience, he is unashamedly directing it towards a domestic public, one for whom the references and asides are immediately recognisable and require no explanation. Even with my grounding in modern Polish history, occasionally I felt like I was eavesdropping on a private conversation, whose nuances and references I barely grasped.
For all that, however, this is well worth a watch. Visually, it is stunning, and the characters are (on the whole) well-developed and convincing. At the end - particularly after the final scenes in which the massacres are shown - one is rather emotionally drained. But it is worth it. Serious film-making should challenge and enlighten as much as it entertains, and "Katyn" does all of those things.
Posted by historian at large at 01:21 4 comments: 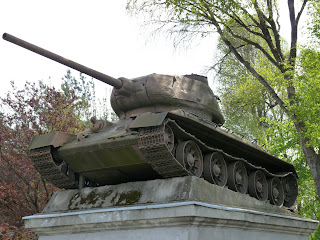 I spent a very enjoyable few days in Wroclaw, Poland, last week. I was there to give a couple of lectures, but I took time out to visit the Soviet Cemetery in the south of the city. I went there on a whim; I had been to Wroclaw many times and had already seen most of the sights, but had never been to the Soviet Cemetery, which was laid out after the war for those that were killed in the siege of Breslau from February to May 1945.

After visiting the various wartime cemeteries in Normandy a few years ago, it struck me that one can tell alot from a war cemetery. Very few, of course, match up to the immaculate condition maintained in British & Commonwealth Cemeteries, but it is still an interesting exercise... 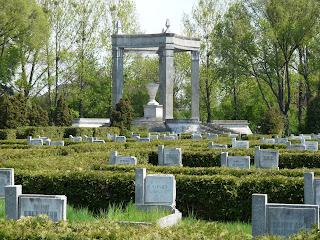 The first impression is pretty positive. The cemetery is laid out on the southern edge of the city, with two T-34s and a couple of artillery pieces as gate guardians. Aside from the inevitable rash of graffiti, the lawns were all pretty well maintained, though some of the headstones themselves were rather the worse for wear. There were around 2,000 of the estimated 6,000 Soviet casualties from the siege; the graves were mostly named and were grouped around a central monument. 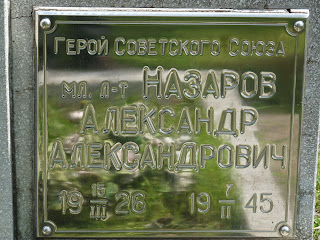 There were a few notable items. The grave of Alexander Nazarov, for instance, is adorned with a polished metal facade (left) and, unusually, gives his life dates. The reason for this special treatment is that Nazarov had been awarded the "Hero of the Soviet Union". Nazarov died on the 7 February 1945, a few weeks short of his 19th Birthday.

There is also a memorial plaque to Soviet Air Force General Ivan Polbin, who was shot down by flak fire outside Breslau on 11 February 1945. A veteran pilot and dive-bombing specialist, Polbin had fought at Khalkin-Gol in 1939, and at Stalingrad, where he was awarded the "Hero of the Soviet Union". Commander of the 2nd Guards Bomber Aviation Corps, Polbin had flown over 150 missions. He was posthumouosly awarded his second Hero of the Soviet Union.

Considering the enormous political changes that have overtaken this part of the world in the seven or so decades since the end of the World War Two, one might have expected the Soviet cemetery in Wroclaw to be rather neglected and rather forlorn. After all, the inhabitants of the city in 1945 - the opponents of those Soviet soldiers - are long gone and have been replaced by Polish civilians. Even the regime that the Red Army imported - Soviet-style communism - has been gone for over 20 years. All of which leaves these sons of the Soviet Union washed up in a foreign land, seemingly neither liberators nor conquerors, rather a footnote to a complex history.

Yet, happily, the cemetery is in good shape; Wroclaw's scouts are evidently doing a sterling job in maintaining it. Perhaps this might become one of the touchstones of the new Russo-Polish rapprochement - it would be a fitting development for a city that has done so much to smooth the often difficult relationship with Germany. Here's hoping...
Posted by historian at large at 07:40 No comments: