I was very pleased to be invited to the UK premiere of "Darkest Hour" last night in London.  The film by Joe Wright, with Gary Oldman as Churchill, broadly follows the circumstances of Churchill's accession to the post of Prime Minister in May 1940, as military reverses in France forced the previous incumbent, Neville Chamberlain, from office. 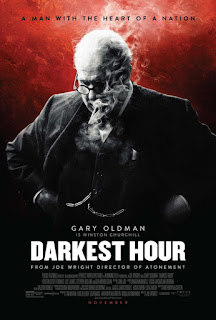 I have to say - the film is beautifully shot, with a few nice directorial touches, and as such is very convincing.  1940s London appears to have been faithfully reconstructed for our amusement.  Oldman is excellent as Churchill - all grunts and jowls and rheumy eyes - only once, briefly, did the mask seem to slip.  I would predict that he will certainly be a contender for major awards with this performance.

The supporting cast were all excellent - Kristin Scott-Thomas was brilliant as Clemmie, and Stephen Dillane stood out as the cadaverous, scheming Halifax.

I'm not minded to judge the film on its historical accuracy - it is an entertainment, and so plays a little bit loose with the tumultuous events of the summer; overegging the power of the 'peace party' (I would say) and exaggerating Winston's wobble (I've never thought that he lacked faith in his own opinions).

However, aside from that, one passage seemed very out of place to me.  The underground scene, where a desperate Winston takes a trip on the London Underground to 'consult' the Great British public on what his approach should be, or (to be generous) on the rightness of his instincts...  This, to me, was a nonsense...  An a-historical projecting back of our modern populist instincts.  Also the bit where he read out the names of those he spoke to and cited their opinions was all too much like Jeremy Corbyn's ridiculously twee referencing of "Muriel from Barnsley" in the House of Commons.   I may be wrong, but I don't think the passage fitted the tenor of the film, nor did it chime (in my opinion) with the Churchill of historical record.

Anyway - that aside - "Darkest Hour" was a good, largely convincing film.  Oldman deserves every gong going for his performance and overall - i'd give it a B+.
Posted by historian at large at 04:02 5 comments: