"Building the Revolution" - if you must 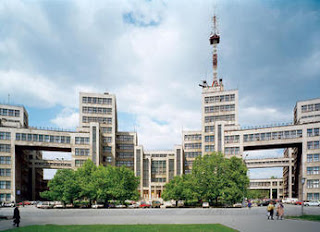 I went down to the Royal Academy this afternoon to visit the "Building the Revolution exhibition, on modernist architecture in the Soviet Union, 1915-1935.

I was not sure what to expect to be honest, but I thought it showed up a few contradictions and hypocrisies that i found interesting.

The exhibition itself was a bit of a curate's egg - some of the headline acts were impressive, other aspects much less so. Though I am not particularly a fan of his work, Le Corbusier's buildings in Russia - the Tsentrosoyuz in Moscow and the Gosprom building in Kharkhov (above) - were of interest, not least because of their soaring ambition.

Certainly, as the architecture geeks and pseuds will tell you - this period in the early years of the USSR was pretty much the only one when the artistic avant garde became (briefly) state policy. The result was a flowering of modernist, functionalist architecture - all swirling concrete, geometric shapes, flat rooves and banded windows - which produced a few buildings of genuine interest.

The problem with this is that the material on display in the exhibition is rather thin. Aside from the headline acts, many of the items shown are fundamentally ugly, lumpen, concrete monstrosities, mostly by architects you have never heard of and whose work you will have little desire to encounter again.

Even the accompanying contemporary photographs by Richard Pare do little to add to the appeal. They are photographically interesting, of course, and beautifully composed images, but they are essentially of the sort of grim, rain-stained, post-industrial townscapes that are sadly so common across the former Soviet Union. It is a world that has few redeeming features.

Beyond that, the third strand of the display is the collection of constructivist art and sketches spirited out of the USSR in the 1920s. Whilst the story of the collection's provenance is certainly interesting, the sketches themselves are not. The catalog claims that they "probe the boundaries between painting and architecture". Sadly, they do little but show up their authors' artistic shortcomings.

So, a rather meagre diet, really, even for the enthusiast. Indeed, one suspects that were it not for the rose-tinted, unthinking Soviet-nostalgia amongst the western liberal elite, such architecture would have been largely and rightly forgotten.

What I found most interesting, however, was that the commentary on the exhibition insisted on viewing the architecture completely in isolation from the brutal political climate in which it was spawned.

The catalog and captions spoke breezily about the Izvestia building in Moscow, for instance, without mentioning Izvestia's dark role as one of the primary propaganda mouthpieces of the Soviet state. It also features a housing project in Ekaterinburg, which was intended for the families of serving Cheka secret policemen - Stalin's equivalent of the Gestapo. Even the architect who designed Lenin's mausoleum - Alexei Shchusev - was the same man who finished off the Lubyanka, the KGB's infamous headquarters in central Moscow.

Such dark, nefarious connections cannot simply be ignored or wished away. For all its modernistic flourishes, the Soviet Union was a brutal, murderous place, in many ways analagous to the Third Reich. We would all do well to remember that. Just as Albert Speer's buildings, or those of Werner March, or Ernst Sagebeil, are considered to be 'tainted' by the connection to the Third Reich, so too should these constructions be tainted by their connection to Lenin and Stalin.

Indeed, by way of an exercise, it is interesting to substitute Nazi-era buildings and architects for those on display in the Royal Academy and then gauge our own response. The idea of an Albert Speer retrospective gracing those venerable halls, for instance, is vaguely horrifying - yet somehow one showcasing Soviet architects is considered acceptable. Well, not to me.
Posted by historian at large at 12:40 No comments: