Pertti Ahonen's "Death at the Berlin Wall" - a review


“Death at the Wall” 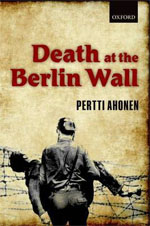 Nostalgia for aspects of life in the GDR, it seems, it still current.  In modern one can buy any number of products that one graced households; the Trabant has acquired cult status; even the humble Ampelmann – who stood guard at pedestrian crossings in the East – has become an icon.

For all that apparently innocent “Ostalgia”, Pertti Ahonen’s new book Death at the Berlin Wall, is a powerful antidote.  Ahonen examines a selection of the 136 individuals killed at the wall in its 28-year lifespan; from its earliest victim, Günter Litfin, in August 1961, to its last, Chris Gueffroy, in February 1989, who was shot and killed just nine months before the Berlin Wall fell.

Some of the stories that he relates are well-known; such as that of Peter Fechter, whose fatal shooting in the August of 1962 unleashed a wave of outrage in the west; or that of the Wall’s youngest victim; 11-year-old Jörg Hartmann, who was killed trying to escape to his father in the spring of 1966.  Others are much less prominent, at least in the west, such as the stories of the “socialist hero-victims”; border guards Peter Göring, Reinhold Huhn or Egon Schulz, who were killed in shootouts with policemen or desperate would-be escapers.

Aside from engagingly relating such episodes, Ahonen seeks to analyse the popular and official reactions to the deaths; the propaganda resulting from both sides and the effect that they had on the ongoing politics of the Cold War and the division of .

His insights are fascinating.  One is astonished, for instance, by the breath-taking cynicism and mendacity of the GDR’s politicians in their attempts to discredit those who would flee the ‘socialist paradise’, yet the story that Ahonen tells is one which is much more nuanced than the simple one that might be told by a latter-day Cold-Warrior.

Rather Ahonen places the undoubted horrors that unfolded in the Wall’s shadow into a much wider context of developing procedures for policing such an unprecedented physical division, as well as question of the west’s recognition of the GDR itself.  He also suggests that the reactions to the deaths – on both sides of the divide – were as much an expression of the needs of domestic consensus and identity-building as they were the products of simple propaganda and ‘news-management’.  In many ways, he suggests, the Berlin Wall was not only a political icon and the most visible symbol of the division of , it also became a highly sensitive barometer of Cold War tensions.

Ahonen provides an admirable combination of narrative and historical analysis, which skimps neither on the human stories at the book’s heart, nor on the forensic and painstaking research that serves to contextualise them.  It helps, of course, that Ahonen is a gifted writer, who is able to combine those elements into a highly readable, coherent and compelling account, but it is especially heartening to see an academic historian giving free rein to his writing and indulging in some good old-fashioned storytelling.

Yet, aside from these necessary nuances and complexities, it is the sheer inhuman contempt that the GDR had for its would-be escapers that sticks most vividly in the reader’s mind.  Those wounded would be denied prompt medical attention, those killed could be anonymously cremated as “scientific material”, and those family members left behind would be intimidated, spied upon and persecuted.  The case of Michael-Horst Schmidt is one of the most shocking.  Shot and wounded in an escape attempt in 1984, the 20-year-old was dead on arrival at hospital 3 hours later, by which time the East German authorities were already beginning to weave a web of lies and obfuscations to blacken their victim’s name and shamelessly exculpate themselves.  It is stories such as these that should make Ahonen’s excellent book required reading for all those who still hanker for the ‘certainties’ of life in the GDR.

[This review first appeared in "History Today" in January 2012]

"Eva Braun: Life with Hitler" by Heike Görtemaker - a review

Albert Speer is said to have once opined that generations of future historians would be “disappointed” by Eva Braun.  Hitler’s wife, he implied, was a nobody: someone who – for all her proximity to great events – had exerted no influence, for good or ill, upon them. 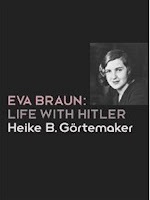 I was reminded of this comment when I finally got around to reading Beate Görtemaker’s biography of Eva Braun last week: “Eva Braun: Life with Hitler”, which was first published a couple of years ago.  Görtemaker touted her biography as the first serious study of Braun’s short life (she died aged 33) and in this respect she is absolutely correct.  Previous studies by Angela Lambert and US journalist Nerin Gun cannot boast the integrity and the rigorous approach of Görtemaker’s.  So, in that respect, the book is most certainly to be welcomed.

The book tells the story of Braun’s life well: her rise from middle-class Munich shop girl to Hitler’s mistress, her attempted suicides, her shadowy role as the ‘lady of the house’ at the Berghof above Berchtesgaden and her sordid death at Hitler’s side in the Reich Chancellery bunker in Berlin in 1945.  Görtemaker appears as an assiduous researcher, who is evidently keen to submit existing accounts and persistent myths to vital, critical scrutiny.

However, the book makes some rather grander claims: most notably that Braun was not the passive, “see no evil – hear no evil” character that history has thus-far perceived.  This is an interesting suggestion, and Görtemaker does well to analyse the various memoir accounts of those in Hitler’s entourage – such as his secretary Christa Schroeder and his architect Albert Speer – in trying to prove this point.  Many of those accounts, like Speer’s, are patently self-serving, dissembling and self-exculpatory – not least in claiming that life in the Third Reich’s inner circle was an interminable round of boring vegetarian lunches where no political matters were ever discussed.

Yet, though the point about self-serving memoirs is well-made, Görtemaker fails to convince with her wider point about Braun’s possible knowledge of and involvement in Nazi politics.  Essentially, though it is well-written and engaging, the book is feeding off scraps.  Due to Hitler’s order at the end of his life that all his personal correspondence was to be destroyed, the evidential base for Görtemaker’s study is extremely thin.  Consequently, she is forced to rely far too much on speculation and guesswork, and as a result the book reads – at times – like a retreaded brief history of the Third Reich with a somewhat unconvincing ‘Eva Braun twist’.

This is a shame, but is perhaps inevitable given the lack of available material.  Despite the book’s shortcomings, this is still the best and most serious biography of Eva Braun that is available.  Yet, that said, it is hard to disagree with Speer’s alleged comment – Eva Braun does appear as a disappointment to history.

Posted by historian at large at 14:02 No comments:

On UKIP (and Seasick Steve)...

On BBC Breakfast News this morning, blues musician 'Seasick Steve' was interviewed.  A rough and ready elaborately-bearded, and undoubtedly talented American guitarist, Seasick Steve had slept rough and made his own guitars before getting a big break in 2006 on a British music programme.  He has since gone on to considerable commercial and critical success.  In the interview, the presenter gave the somewhat obvious analysis that Seasick Steve's success was due, in large part, to the fact that he came at a time of manufactured pop-bands and sleek, all-pervasive marketing.  He was, put simply, a whiff of authenticity in a world of clones.

Half an hour earlier, another interview on the programme was far less cozy.  Paul Nuttall (MEP), Deputy Leader of the UK Independence Party (UKIP) was on to discuss his party's impressive showing in the English local elections, where they were set fair to upset all the major parties.  He was given a rather bumpy ride, with the sort of hostile questioning that representatives of the major parties rarely encounter.

UKIP is a peculiar phenomenon, which the political and media elite are keen to dismiss simply as a good old fashioned protest vote; the kind of mid-term slap down from the voters that is traditionally expected in the local elections, a chance for the voting public to hurl their virtual tomatoes at their politicians without any fear of serious consequences (except for local government).  Another BBC commentator even described UKIP as 'plebeian' - bringing to mind Bertolt Brecht's line that "the people had forfeited the confidence of the government" so the government should "dissolve the people and elect another".

But, such arrogant complacency is very misplaced.  I would argue that UKIP is far more than just a reflexive public protest.  Though its origins lie in a rejection of the EU, and this issue undoubtedly still forms a core of its support, it seems to have grown into a much more profound revolt against the Westminster political elite and the supposed 'liberal consensus' that they espouse.  It is as much a rejection of the 'smooth operators' of Westminster: the expensively educated Camerons and Osbornes and Milibands, as it is a rejection of the identikit policies that they appear to represent: EU orthodoxy, gay marriage, 'diversity' and all the rest.  UKIP is in many ways a revolt against political correctness itself.  And Westminster needs to take note, not just hide behind the old cliches and slogans, and hope that it will go away.

So - to return to 'Seasick Steve' - stretching the analogy somewhat, UKIP might be seen as the 'Seasick Steve' of British politics: a popular rejection of the bland, the manufactured and all that which is perceived as false and mendacious in Westminster.  But, as such, it must be prepared for a rough ride both from the media and from its political rivals.  Break the mold in music and you will be hailed as a visionary, but break the mold in politics and you risk being cast as a dangerous heretic.
Posted by historian at large at 02:17 1 comment: