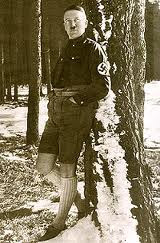 Alot of newspaper editors had fun this week with pictures of Adolf Hitler in a variety of outfits - lederhosen, for instance, or a very fetching SA cap. The Telegraph covered it here, as did the Times and the Daily Mail here It was all very amusing - and a chance to dust off a few old puns; "Camp Commandant" said the Daily Mirror, "Mein Camp" quipped The Sun.

Yet, behind the dictator-themed mirth there is an important historical point to be made about these pictures. The photographs were taken by Hitler's photographer, Heinrich Hoffmann, in the 1920s and - along with a number of other shots showing Hitler in dramatic poses (as here) - they show Hitler 'working' on his public image. 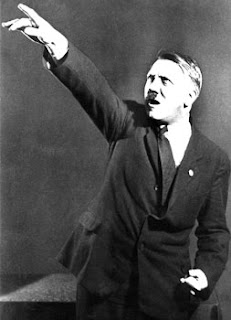 The concept of a politician honing their public persona does not come as a surprise to our modern minds - its what they do - they preen themselves, construct an acceptable, appealing public persona and then get on with the business of baby-kissing and getting elected.

Yet, the important point to make here is that Hitler was operating at a time when few politicians had any idea at all about public image. Most of his fellow German politicians were top-hatted, frock-coated throwbacks to the 19th century - and the idea that they might experiment with different 'looks' or introduce dramatic gestures into their public speaking routines would have appeared faintly ludicrous to them.

But, Hitler (like Mussolini, in this regard) was of a very different stamp. He worked incessantly on his public persona, practised his public speaking, managed his image - even employing Heinrich Hoffmann, a talented and successful photographer, to help him. Hoffmann served as a visual sounding board for Hitler, photographing him in various outfits and various poses, and then helping him to decide what 'worked' and what didn't (The Lederhosen and the SA cap, by the way, did not 'work' and were duly consigned to Hoffmann's archive). This, then - far from being just an opportunity to have a giggle at Hitler looking silly - is a glimpse into Hitler's political modus operandae. This was how he marked himself out as a 'new' breed of politician. This was how he made himself appealing to the German people, with disastrous consequences.

If we can understand that - and have a laugh at his expense - then fine. But, in our rush to find humour in Hitler, let's not miss the important historical point that these pictures convey. 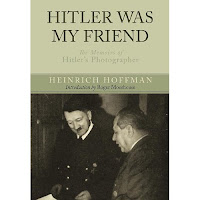 The book from which the pictures come, by the way, is Heinrich Hoffmann's memoir "Hitler was my Friend", published this week by Pen & Sword Books.  Oh, and it has an introduction on Hoffmann by yours truly...
Posted by historian at large at 07:02 2 comments: