NKVD massacre site discovered - one of many?

An interesting news story caught my eye yesterday.  A piece on the Telegraph website reported that Ukrainian and Polish archaeologists had discovered a mass grave in the grounds of a former castle at Volodymyr-Volynsky in Western Ukraine.  According to the investigators, the grave contained some 950 corpses, including both civilians and Polish military personnel.  Cartridge cases found at the site were said to have come from the Tokarev TT pistol, the wartime side-arm used by Red Army officers as well as the NKVD.  The victims, it is said, had been executed with a shot to the back of the head.

For students of Polish history, this story will seem like "so far, so familiar".  It will, of course, be very reminiscent of the Soviet Katyn massacres, where some 22,000 Polish army officers, policemen and others were killed in the spring of 1940 - with the only exception being that, on that occasion, NKVD killers used German Walther pistols rather than their own Tokarevs.

In fact, this is not even the first NKVD mass grave discovered in Volodymyr-Volynsky.  Others were discovered in 1997 and again in 2013, containing the corpses of some 700, mainly Polish policemen.

Given the wider political situation in Ukraine at the moment, it is likely that we will hear a lot more of such discoveries.  As I noted in my book "The Devils' Alliance" almost every town in the Kresy (Eastern Poland, occupied by the Soviets in 1939) saw murders and persecutions of the local population by the NKVD.  Many of them would have witnessed their own "Katyns", especially in the murderous phase immediately before the arrival of the Germans in June/July 1941, when the Soviets disposed of all those 'prisoners' that they did not want to leave alive.  At that time alone, it is thought that 3,500 were murdered by the NKVD in Lwow, 2,000 in Luck, 600 in Sambor, 890 in Czortkow, 574 in Tarnopol, 550 in Dubno... and so it goes on.

So, now that Ukraine finds itself at odds with the Kremlin, we can expect to hear of similar gruesome discoveries elsewhere in the country.  I suspect that such sites were probably never entirely forgotten and have lived on in folk memory; perhaps their locations are known precisely, perhaps only vaguely.  But with the seismic geo-political shift of recent months, the climate is now right for them to be "discovered", investigated and publicised. They certainly give Kiev a stick with which to beat Moscow in its current conflict, but we should see beyond the current squabble and recognise them for what they are: as historically important reminders of the horrors of Soviet rule.
Posted by historian at large at 00:45 No comments:

The Guardian review of my "Devils' Alliance" - a response

I've not really had a bad review before, so this was a new experience.  The Guardian today published a review by Richard Evans of my new book "The Devils' Alliance", on the Nazi-Soviet Pact, and it was a rather predictable response.

I had expected that the left would cry foul about any book that draws attention to this most egregious chapter in Soviet history.  T'was ever thus.  As I write in the book, the Pact of 1939 should rank alongside 1956 and 1968 as one of the most horrific, embarrassing years in the history of communism.  The fact that it doesn't is tribute to the skill of the USSR's post-war propagandists in burying the story as best they could. The story of the Pact might not be unknown to academics like Professor Evans, but - he can take my word for it - away from the groves of academe it barely registers...  My primary argument is that it really should.

Professor Evans is generous is describing parts of the book as "masterly"... praise indeed.  But he takes issue with what he describes as the book's "bias".  Actually, his review is to a large degree guilty of tilting at windmills.  Its subtitle asks "Was Stalinism really worse than Nazism?", thereby suggesting - wholly incorrectly - that this is a comparison that I make.  I do not.  I do not make this argument at any time in the book.  My position, which I think comes across loud and clear, is one of "A plague on both their houses", and is made blatantly obvious by the title of the book.


So, rather than expressing a bias, I would argue that I am actually trying to combat one.  Namely the bias on the left that persists in whitewashing Soviet crimes, in seeing Stalin's Soviet Union in some way as "a noble idea gone awry", indeed in seeing Stalin himself as the wartime "Uncle Joe", rather than the murderous psychopath that he was. It is the same bias - or "asymmetry of tolerance" - that I have written about before, in which the Nazis and the Soviets are viewed in some way as opposites - rather as twin purveyors of evil - the twin "Devils" of my book's title.

Strangely, Professor Evans praises much of what I do write, but criticises what I don't.  He seems to have wanted a wider discussion of the early phase of the war, suggesting that I should have covered the Nazi occupation of Greece, for instance, or their depredations in Yugoslavia - in some way, one imagines, as a counterbalance for Stalin's hideous treatment of the Poles, the Baltic peoples, the Finns and the Bessarabians.

In response, I would say that I did not set out to write a history of the opening two years of the war in Europe.  Others can do that.  I set out to write an account of the Nazi-Soviet Pact - about its sordid politics and its hideous effects on the ground - on the unfortunate peoples upon whom its paragraphs had the most direct effect.  Thus, I give ample coverage to German actions in their zone of occupied Poland, and to the growing tendency towards ethnic cleansing that Berlin is groping towards prior to summer 1941, but Greece is beyond the remit that I set for myself, and Yugoslavia only imposes upon my narrative as the cockpit of conflicting and increasing Nazi-Soviet ambitions.

The uncomfortable fact for Professor Evans and others on the left is that in those opening two years of World War Two, the Soviet Union was much more practiced than Germany in the sifting, persecution and deportation of subject populations.  We forget perhaps, but at this point the Holocaust had not yet begun. Hitler may have been an eager student of such matters, but Stalin was very definitely the master.  If there is an "imbalance" in the book therefore, it reflects a historical imbalance, and one with which many on the left are uncomfortable.

So, there is much here to unpack of course - and, as ever, much to constructively criticise - but blanket, blinkered rejection of the sort expressed in this review, I think, says rather more about the reviewer's prejudices than it does about my own.  Naturally, I would urge those interested in this subject to read the book and make their own minds up.

A curious tome caught my eye some weeks ago - "Gottland" is a book about communist Czechoslovakia written by a Polish journalist Mariusz Szczygiel.  As one steeped in Mitteleuropa, I naturally ordered a copy, spurred by the positive reviews. 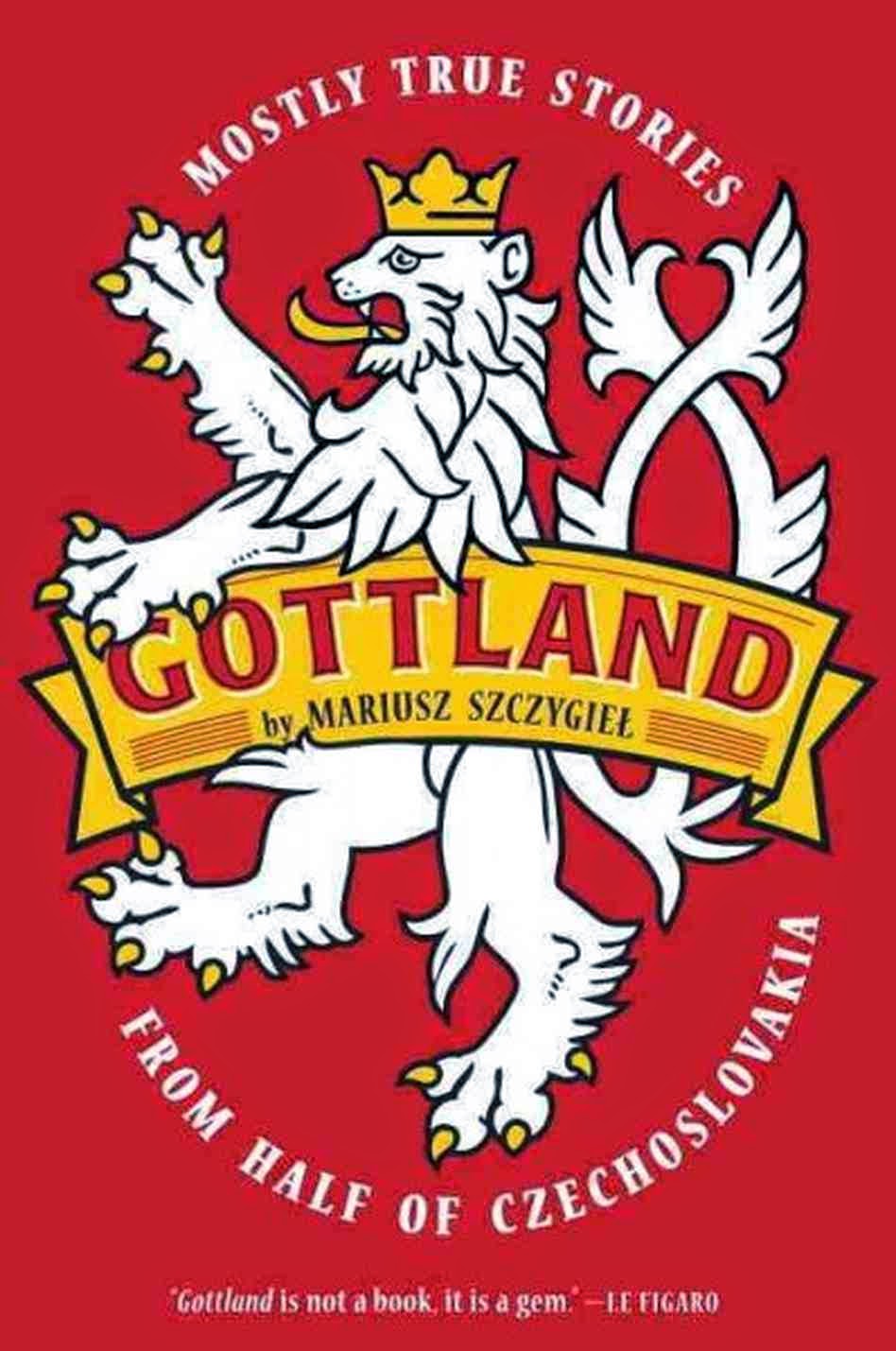 It is indeed an interesting book.  Essentially, it is a collection of anecdotes and vignettes from communist-era Czechoslovakia, expertly researched by the author and told in a very accessible way.  The tales are many and varied - from that of Lida Baarova, Goebbels' one-time mistress, to the sad fate of the man who designed Prague's former monument of Stalin, to the intertwined lives of Zdenek Adamec (who self-immolated in Prague in 2003 in imitation of Jan Palach, and the doctor who treated the dying Palach back in 1969.

Gottland has a good go at evoking the Czech soul - a curious mixture of the other-worldly bizarreness of Kafka and the worldly guile-cum-innocence of Hasek's "Good Soldier Svejk".  Such is the gentle tone of the book that the inattentive reader might almost assume that it is a nostalgic paean - such as is common is some parts of central Europe - to the reassuring certainties of 'real existing socialism'.  Yet, it is nothing of the sort.  Gottland is more of a gentle broadside; a softly-spoken tirade against the petty accommodations, the pusillanimity and the sheer mendacity engendered in ordinary people doomed to live under communism. For that reason alone, it should be required reading, particularly for those who still hanker for that benighted system.

Though I thoroughly approve of that subtext, and I generally enjoyed the ride, I found "Gottland" somehow unsatisfactory.  Maybe it is a little too gentle in it's approach, too emollient in its tone.  It left me with the impression that it was either too clever by half or not clever enough.  Perhaps a tighter style, or a more interventionist editor might have strengthened the political message.  But then, maybe that soft-soap approach is what readers want?

Either way, its an engaging and illuminating read.  And if you are interested in the recent history of the region, and the myriad ways in which societies adapt under totalitarian systems, then it is certainly worth a read.


Posted by historian at large at 12:30 No comments: