The faded - and fading - glory of Versailles

A visit to Versailles whilst on holiday this month gave me food for thought.  The grand palace of the French kings, to the south-west of Paris, has long fascinated the world.  Back in the day, every European monarch wanted his own "mini-Versailles" in imitation of the French monarchs - like King Ludwig of Bavaria at Herrenchiemsee.  Nowadays, it seems (quite rightly) to occupy a position in the European "Grand Tour" and is frequented by countless hordes of Chinese, Americans, Russians and seemingly everyone in between. 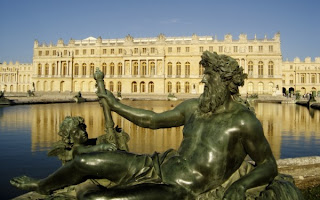 It is certainly huge and hugely impressive.  Yet, for the visitor, it can be rather underwhelming.  For one thing, the interminable queuing grates.  Even in high-season, surely the authorities that be could dream up a more imaginative solution to the large numbers of visitors than just snaking them all across the courtyard?

And, once you get to the front of the queue, you invariably find that you will then have to go and queue somewhere else, and even buy an additional ticket for entry elsewhere.  All protestations to the contrary, of course, are met with a stereotypical Gallic shrug, and the novelty that French officials can now be rude to their visitors in English as well as French.  Chaos was the only word that sprung to mind, along with a sense of their contempt for the visiting public.  If those that run Versailles carry on treating us plebs in this way - heads might have to roll (again).

Once inside the impression scarcely improves.  For all its apparent size, the usable space within Versailles seems to be remarkably small.  And no effort is made to use the entire wing that we had queued through serve as a introduction or a whetter of the visitor's appetite.  As a result, you get whisked through the royal apartments (on a tide of humanity) surprisingly quickly - spending less time inside the palace than you had already spent outside queuing in the courtyard.  The lack of space is exacerbated by the ludicrous decision to install items of so-called "modern art" in many of the rooms - including a pair of giant shoes made of pots and pans at one end of the famed Hall of Mirrors, and a life-size, pink furry helicopter in another room.  Isn't there a law against such mindless desecration?

The audio tour was good - as far as it went - giving details of the decor, the architects and the royals themselves that once inhabited the building.  But, there was no wider context.  No mention was made, for instance, of the proclamation of the Germany Empire, which was made in the Hall of Mirrors in 1871.  Most egregiously, no mention was made either of the Treaty of Versailles of 1919 - also signed in the Hall of Mirrors.  Surely both these events are of as much - if not more - significance to the average visitor that the arrangement of King Louis' bedchamber?  If the palace's curators are this shockingly myopic about Europe's modern history, they are truly in the wrong job.

Add to these failings a rather lacklustre state of general repair, bored staff staring into space, audio-guide numbers that are illegible because they are at ground level... the list goes on.  Tea and cake at €15 a head was probably par for the course, but, unsurprisingly, the toilets were absolutely awful.  Though they proclaimed to be all up-to-date with "baby-changing facilities",  I would scarcely let my dog in there such was the state of them.

In all, it was rather like a trip back in time.  But not in a good way... Rather than a visit back to the glamour and excess of the 1770s, it was like going back to the 1970s, when the concepts of museum curatorship were unenlightened, and the idea of actively engaging with your audience was considered dangerously avant garde.  I, for one, was left wondering what a modern London museum curator could do with the raw material presented by Versailles.  A damn site more, to be sure, than is being made of it at the moment.  Versailles' glories, it seems, are fading still.