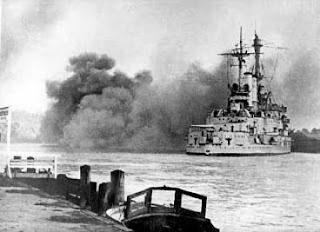 It seems that none of the major political players, gathered at Gdansk yesterday to commemorate the 70th anniversary of the outbreak of World War Two, could resist playing politics with the event.


Worst offender, predictably, was Russian Prime Minister Vladimir Putin, who demonstrated his nation's idiosyncratic grasp of 20th century history to full effect. He started by paying tribute to the "bravery and heroism" of the Polish people, soldiers and officers, who had been the first to "stand up to Nazism" in 1939.


So far, so uncontroversial, you might think - but think again. Aren't those the same Polish people and soldiers whose homeland was invaded by the Soviet Army on 17th September 1939 - two weeks after the Wehrmacht? The same Polish people and soldiers whom the Soviets deported in their thousands to Siberia, many of them never to return? And the same Polish officers who were murdered in cold blood by Putin's own former employers - the NKVD/KGB - and buried in the forests of Byelorussia?


As if that were not enough double-speak for one day - Putin went on. Before the assembled audience of worthies and the world's press, he condemned any collaboration with the Nazis between 1934 and 1939 as “morally unacceptable and politically and practically senseless, harmful and dangerous”. A reference, you might think, to the Nazi-Soviet Pact - even a veiled apology? No. Nothing of the sort. It is in fact a rather barbed and cynical reference to the Polish-German non-aggression pact of 1934 - a rather cack-handed attempt to equate that defensive agreement with the cynical carve-up agreed between Hitler and Stalin five years later.


Given that the 'tone' had evidently been set, others followed suit. Polish President Kaczynski is never one to shirk an opinion, and he duly denounced the Soviet invasion of Poland in 1939 as "a stab in the back", and stated that the mass murder of Polish officers by the Soviets in 1940, at Katyn, must be treated as a war crime. He closed with a rousing "Glory to the heroes of Westerplatte, glory to all of the soldiers who fought in World War II against German Nazism, and against Bolshevik totalitarianism."


Polish Prime Minster Donald Tusk then joined in - referring to a Red Army cemetery close to his home. "Tens of thousands of young people lost their lives here", he said, "They gave their lives for liberation, but they didn't bring us freedom." He was right, of course, the arrival of the Soviet Army in 1945 certainly drove out the Nazis, but it also ushered in over 4 decades of communist rule. If he was listening, Putin would have been squirming.


German Chancellor Angela Merkel was perhaps the least controversial of the three. She began by paying tribute to all those who died in a war "unleashed by Germany" and perhaps in a conscious echo of Willy Brandt in Warsaw in 1970, added that she "bowed before the victims".


Yet, Merkel too, had an axe to grind. Though she stated clearly that nothing could dilute Germany's "eternal historic responsibility" for the war, she nonetheless felt moved to remember the plight of the many millions of German refugees deported out of the historic eastern provinces after 1945. Given that they were deported from lands that were subsequently taken by Poland - and were displaced primarily by Poles - this reference was certainly not uncontroversial. This time, Kaczynski and Tusk would have been squirming.


Then she aimed a broadside at Putin, referring to Germany's good relations with her neighbours and Germany's ability to "confront" its history - an ability sadly lacking in Putin's Russia.


So, all in all, another reminder that recent history is never far below the surface in Europe. Little wonder perhaps that it was an American who famously proclaimed "The End of History" a few years ago - how very wrong he was.
Posted by historian at large at 01:56 1 comment: