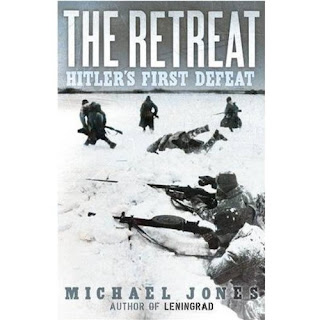 
After tackling the battles of Stalingrad and Leningrad, it is perhaps inevitable that Michael Jones should turn his attention to the third of that bloody trio, the battle for Moscow.

The Retreat follows the pattern of the other two books, giving very much the view of the soldier or civilian on the ground, with the occasional admixture of wider strategic or tactical matters. It’s a recipe that works rather well. Jones has scoured the published and unpublished sources for eye-witness accounts of the battle from both sides, and these he weaves together into a tight narrative which accentuates the frenzy of battle and the horror of the aftermath.

All the scenes that the reader would expect are rendered here in searing first-hand testimony: the Germans catching sight of the gleaming domes of the Kremlin through their field-glasses before being forced to retreat; the forward sentry found frozen solid by his relief; the corpse squashed flat by countless vehicles, the prisoners dying by the thousand. No quarter was offered in the Battle for Moscow, and none was expected. Few prisoners were taken.

On the whole, Jones’ approach works very well, giving the reader a discomfiting vision of the hideous nature of the war on the Eastern Front, both sides driven on by brutal ideologies and a cycle of revenge, and assailed by a ferocious Russian winter in which temperatures plummeted to -35ºC.

If there is a complaint with the book, it is that Jones might have benefited from a more sparing approach. The material that he has gleaned is certainly powerful, but it could be used to better effect if it were occasionally held back, if the ‘gasp-moments’ were fewer and further between. As every horror film director knows, you can only shock your audience a few times; and if you try to do it too often, you are at risk of them switching off altogether.

Jones occasionally falls into this trap; hurling quote after quote at the reader – Soviet after German – seemingly in the hope that something might strike a chord. The result is not only ‘horror-fatigue’ but also a lack of context and orientation, which might echo battlefield conditions, but does little to aid clarity or reader engagement. It might seem strange to criticise a historian for having too much excellent material, but that seems to be the case. One is reminded that deciding what to leave out is all part of the creative process.

That criticism aside, “The Retreat” is a fine piece of work, which shows the horror of the Moscow campaign in all its searing detail. If war is hell, Moscow must have been its most infernal chapter, and this book is a worthy guide.