It is peculiar that Reinhard Heydrich has not been the subject of a few more serious-minded biographies.  After all, as the architect of the SS-state and the master-planner of the Holocaust, he offers a unique perspective on the inner workings of the Third Reich, whilst as an individual he displays the sort of nefarious, Mephistophelean character traits that would have many historians salivating. 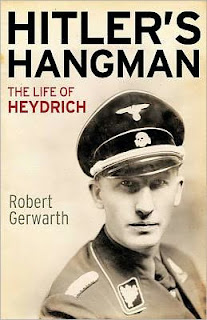 Yet, despite his high profile in the historical record, Reinhard Heydrich has until now only rarely attracted the attentions of serious English-language biographers.  Robert Gerwarth’s book is something of a rarity therefore.

It is certainly worth the wait.  Gerwarth ably tracks the stages of Heydrich’s life; from his early years in , through his aborted naval career, to his fateful meeting with his later wife – and convinced Nazi – Lina von Osten.  It was Lina who evidently turned the, until then, rather unpolitical Heydrich into the prize Nazi specimen that he would later become; allying his cold, calculating nature with a political and racial ideology within which he could achieve his ambitions.

Once installed in Himmler’s security apparatus, from 1931, Heydrich would be the driving force in the emergence of the SS, constantly expanding its remit and espousing a perpetual radicalisation of Nazism.  He was ever vigilant, seeking out new enemies – real or imagined – to be confronted and destroyed.  Not so much a safe pair of hands, rather a radical and utterly uncompromising administrator, Heydrich quickly emerged as the coming man of Nazi Germany.

His career was correspondingly stellar.  Already Himmler’s deputy, he headed the Reich Security Main Office (RSHA) from 1939, thereby uniting all branches of the Nazi police and security network under his control.  Later, in 1941, he was appointed to head the politically sensitive and economically vital ‘Protectorate’ of and .  Most infamously, perhaps, he assumed supervisory responsibility for the ongoing Holocaust at the Wannsee Conference at the start of 1942.  Only his death at a Czech assassin’s hand the following summer stopped his seemingly inexorable rise.

Gerwarth tells this complex tale with considerable aplomb.  He writes with real verve, pacing his account well and providing the perfect mix of narrative and analysis.  Pleasingly, he is not shy of indulging in a few dramatic flourishes when the material and the circumstances allow, making this a history book that one can genuinely read almost in a single sitting.  Moreover, he is surefooted and admirably clear on the historical framework, not least in explaining the murky and complex inter-relationships within the Nazi police state, and delineating the twisted course of the genocide against the Jews.

The Heydrich that emerges from this account is a more rounded individual from the earlier, sometimes rather breathless, biographies.  He is revealed here as a human being; a single-minded, paranoid, psychopathic human being, but a human being nonetheless.  Interestingly – in a state that prized physical and racial perfection – Heydrich was the only one of the senior personnel who came anywhere close to matching the taxing ideals, despite a persistent rumour of his part-Jewish blood.  Tall, blond, aquiline, he was an accomplished sportsman (he fenced at national level), a gifted violinist and a trained pilot.  A man of deeds rather than theories, he was an ascetic and workaholic and he played the Byzantine world of Third Reich politics like a chess grandmaster.  He was as close to a “Nazi Renaissance man” as it was possible to get.

Robert Gerwarth set out to remedy the lack of a scholarly biography of Reinhard Heydrich – one of the most pivotal and influential figures in the history of the Third Reich.  He has succeeded admirably, producing a work that is as authoritative as it is enjoyable, and in the process setting a new standard by which subsequent biographies of Hitler’s ‘Blond Beast’ will surely be measured.

This review first appeared in "History Today" in July 2012
Posted by historian at large at 01:10 2 comments: