9th November - A Day that will live in History 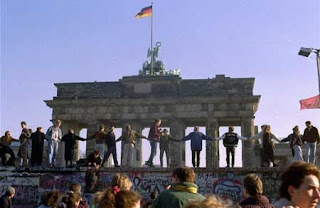 Today - 9th November - is a very important day. As you will have seen in your morning newspaper, it is the 20th anniversary of the fall of the Berlin Wall; perhaps the most important single event in our recent history. It was 20 years ago this evening, that East German border guards stood aside for the very first time, opened the gates and border crossings and allowed the East German people to simply walk through to the west. Momentous, you would think, and rightly so.
Yet, the 9th November has had a curious resonance through German history. Not only was it the day that the Wall fell, it was also a red-letter day for the Nazis, too. The 9th November was the day in 1923 that Hitler launched his attempted coup against the Weimar Republic - the so-called Beer-Hall Putsch - which ended with his imprisonment and the virtual collapse of his movement. In later years and during the Third Reich, the 9th November then became one of the most important dates in the Nazi calendar; a day of commemorations and of solemn ceremonies across the Reich, and especially in Munich (where the original Putsch had taken place), where the Nazi martyrs were honoured.
The 9th November 1938 was also the date of the famed Reich "Kristallnacht" - the state-sponsored pogrom against Jewish homes and businesses, by which Nazi anti-Semitism first showed its teeth. Around a hundred German jews were murdered and 30,000 or so were consigned to the concentration camps. In addition, hundreds of synagogues across Germany were destroyed or desecrated.
The following year, the 9th November brought yet more momentous events. On that day in 1939 - 70 years ago today - Georg Elser made his little-known attempt to rid the world of Adolf Hitler. His bomb - planted in the Burgerbraukeller in Munich - exploded barely 13 minutes after Hitler had given a speech there. In the aftermath, 8 lay dead and around 60 were injured. Had Hitler been standing at the lectern, he would most certainly have been killed, but the speech had been cut short.
Lastly, 9th November 1918 was the day on which the German Republic was proclaimed at the end of the First World War.
Of course, this is not all mere happenstance. There is a thread running through at least some of these events. Hitler chose the anniversary of the proclamation of the (to him) hated German Republic to launch his grasp for power. Then, during the Third Reich, the commemoration of that putsch then gave Georg Elser his opportunity to seek to do away with the German dictator. The other two events - Kristallnacht and the fall of the Wall in 1989 - are the only coincidences.
So, 9th November, is a day which is central to modern German history - a day which commemorates both the best and the worst in Germany and the Germans.
Posted by historian at large at 01:40 No comments: