There is a discomforting moment in Peter Pomeratsev's brilliant book "Nothing is True and Everything is Possible" when it dawns on the reader that this really isn't funny any more. 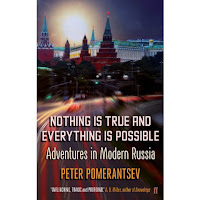 The book - subtitled "Adventures in Modern Russia" - is a journalistic survey of a dysfunctional, corrupt kleptocracy.  Through his work as a TV journalist, Pomerantsev has collected numerous vignettes - many of them bizarre and darkly comic - which colour the picture that he paints of Putin's Russia.  Of course, it is by definition a pointillist picture, where a single anecdote is mobilised to tell a wider narrative, but it is no less convincing - or terrifying - for that.

Pomerantsev opens with the seemingly ubiquitous Russian "gold-diggers", ordinary girls from the provinces who hunt down eligible (for "eligible", read "rich") men in the night-clubs of the capital, looking for a sugar daddy, perhaps even a role as a trophy wife.  They are devious and determined.  Honing their performance as required, from quoting Pushkin and pontificating about modern art, to tottering on the highest of heels. There are even, he tells us, a network of schools and advisers training the girls in the best way to attract (and supposedly keep) what they call a "Forbes", named after the American business magazine which regularly lists the world's richest men. It is all a very long way from "Romeo and Juliet".

From such almost comical beginnings, Pomerantsev moves into progressively darker territory.  For instance, he tells the story of Ruslana Korshunova, a highly-successful Russian supermodel, who committed suicide aged only 20 when she threw herself from the balcony of her 9th floor Manhattan apartment. After dismissing the usual peril of drugs, Pomeratsev suggests that the cause of her death as her involvement with a curious Russian cult - "The Rose of the World" - which dehumanized its members through emotional disorientation and humiliation.  One of Ruslana's last posts on social media said "I am so lost. Will I ever find myself?"

Or consider the dark tale of Yana Yakovleva, the co-owner of a chemical firm who - after resisting official extortion attempts - was arrested on trumped-up charges and sent to prison on remand, where she spent 7 months.  It is a fascinating, terrifying chapter; with echoes of Kafka and of Arthur Koestler's "Darkness at Noon" - the prisoner seemingly impotent and cast into a parallel universe where black is white and nothing is as it seems.

Yet, if the reader was consoling themselves that such horror stories of abject national malaise were confined to Putin's Russia, the last chapter of the book shows that the contagion is spreading.  Through the sorry stories of Boris Berezovsky, Bill Browder and Sergei Magnitsky, Pomerantsev shows how Russian corruption is spilling beyond national boundaries.

We like to kid ourselves, Pomerantsev tells the reader, that the reason that Russia's oligarchs like to congregate in London, or Paris or New York is that they fundamentally aspire to be like us - that we might adopt a civilizing, democratizing role - that we might somehow play the Greeks to their Romans...  This, however, is wishful thinking, says Pomerantsev: It is not we who are influencing them - from the politicians turning a blind eye to money-laundering, to estate agents unconcerned by high-rolling Russian buyers - it is they who are influencing us, and not for the better.

This is a brave, terrifying, depressing book, which deserves to be read.

Posted by historian at large at 11:33 No comments: