Of White Horses and Horsesh*t... 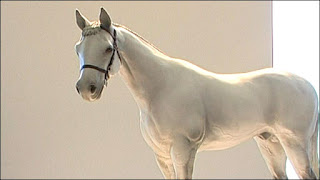 I know I'm a bit late coming to this one, but its been bothering me a bit recently.
It seems the authorities have seen fit to commission a 50 metre statue of a white horse (as shown here) to adorn the Kent countryside and the south-eastern approaches to London. http://news.bbc.co.uk/1/hi/england/kent/7880889.stm
Now, I am a big fan of public art and statues in our public spaces. They can help to anchor our sense of identity, telling the world (and ourselves) who we think we are, where we think we have come from, what we think is important. In this capacity, public art can be hugely beneficial to society at large, but it can also betray our shortcomings, our misconceptions and our folly.
Sadly, this Kentish white horse falls into the latter category.
There are any number of reasons to criticise it. Firstly - like much modern art - it is spectacularly uninspiring; and seems to seek to make up for its lack of any interesting, or inspirational features merely by being gigantic - a preposterous 49 metres high.
Secondly, it is utterly devoid of any content or deeper significance. Various talking heads (including the sculpter no doubt) have waffled on about how central horses are to our culture and that a horse is even the symbol of Kent. Yadda, yadda, yadda. The symbol of Kent is the Invicta - a prancing horse - with all the vitality, strength and vigour that that implies. This sad supine nag, in comparison - appears to be fit for little but the glue factory.
This echoing emptyness at the heart of the project, is - I think - the main problem, and it is this that speaks volumes about modern Britain. This Kentish horse is a bizarre hybrid - the product of arrogance mated with cowardice, bombast married to fear. It is the product of a ruling liberal elite that - like an ancient potentate or megalomaniacal dictator - wants to paint its name in the sky, celebrate itself for all to see. And yet, for all its bold impulses, that same liberal elite does not know what it actually stands for, and is afraid to do anything that might be considered in any way divisive, exclusive or controversial.
So, the end result is that they choose something that is so anodyne, so utterly devoid of any meaning or significance that it cannot possibly offend anyone. Its the application of the 'lowest-common-denominator' to our public art, and its a sad indictment of where we are as a nation. it screams that we have forgotten who we are, forgotten what we stand for and forgotten what is dear to us.
Those visitors and tourists approaching London through the beautiful Kent countryside will, I reckon, not be impressed by the Horse - rather their impression of its significance will probably be similar to the vista that will greet them - a horse's arse.
Posted by historian at large at 04:32 No comments:

"Haunted City - Nuremberg and the Nazi Past" by Neil Gregor

"Haunted City - Nuremberg and the Nazi Past" by Neil Gregor
The Third Reich hangs over Nuremberg like a bad smell. Not only did the city play host to the annual Nazi Party rallies of the 1930s, and the post-war trials of senior Nazis, it was also chosen as the venue for the publication of the ‘Nuremberg Race Laws’ of 1935; the legislation which began the persecution of German Jewry and prepared the way for the Holocaust. Even modern-day Nuremberg – a vibrant, democratic city – finds it hard to escape Hitler’s toxic embrace. Many of the old Nazi sites, for instance, remain to this day; too grandiose to be of use, too expensive to demolish.
For all its Nazi associations, however, Nuremberg’s experience of World War Two was actually rather typical for a middle-ranking German city. This combination of factors has led historian Neil Gregor to take Nuremberg as a case study to examine the complex way in which post-war German society has dealt with the fraught issues of memory, victimhood and guilt. The result, Haunted City, is a fascinating glimpse into the dark recesses of the German psyche.
Examining the period up to 1968, Gregor contends that for the first decade or so after 1945, the wounds and divisions within German society were so fresh and so raw, that only a vague, emollient culture of shared victimhood was possible. Before they could think about what they had done to others, it seems, Germans had first to tend their own wounds. As a result, German ‘memory culture’ initially had a rather self-pitying, narcissistic flavour; tending to concentrate much more on Germany’s own suffering – embracing civilian and military deaths, for instance, and bemoaning the fate of expellees, refugees and POWs, whilst marginalising all those ‘genuine’ victims of Nazism, such as Jews, communists and forced labourers.
Gregor brilliantly illustrates his point with the example of a bell-tower erected in Nuremberg in the 1950s to the memory of the city’s civilian dead of World War Two. In all the wrangling over the precise wording and design of the monument, it seems no-one saw fit to question the fact that the tower was built using stones from the city’s synagogue, destroyed by the Nazis in 1938. A less sensitive approach to the public commemoration of the war would be hard to imagine.
Thankfully, matters did improve. By the early 1960s, a new memory culture was beginning to challenge the old; offering engagement and dialogue where once had been avoidance and an uneasy silence. Though by no means uncontested, this change was a result of many factors, amongst them the generational shift, the ongoing social liberalisation and the re-emergence of civil society in Germany. With the firm establishment of a mature, pluralist democracy, it seems, the opinion formers of Nuremberg were able to move on from the tactical amnesia of ‘German victimhood’ towards a more self-critical – even confrontational – attitude towards their recent past. In time, therefore, public exhibitions on the Holocaust and the Warsaw Ghetto would take their place alongside the traditional commemorations, such as the “Day of National Mourning”.
The study is brought to a close with a rather illuminating episode. In the late 1960s, the right-wing, neo-nationalist NPD was becoming a regular feature in Nuremberg politics; making deliberate, symbolic use of the city’s Nazi sites. In 1967, however, after angry demonstrations from trade unionists, students and victims of fascism, the party was denied the right to use the city’s main congress hall for a local election rally. Nuremberg, which had once been so synonymous with the Nazis, had succeeded in driving out Nazism’s ideological descendants.
In his conclusions, Gregor is admirably fair. The early narcissistic phase, he suggests – far from being malevolent or born of mean-spiritedness – was actually an important part of the healing process; providing a soothing common identity to bridge the divisions of a deeply fractured society. Similarly, he argues that the later critical engagement with the past was symptomatic of post-war German society’s recovering health.
In describing these developments, Gregor is a thoughtful and surefooted guide, relying on solid archival research, marshalling his facts well and remaining cogent in his arguments. As a respected and award-winning academic, he makes few concessions in his writing for the lay reader, yet he manages – occasional lapses notwithstanding – to present his sometimes challenging subject matter in a style that should appeal beyond his core audience.
Haunted City is not always an easy read, therefore, but it is nonetheless an important book. It investigates the difficult process of acknowledging and remembering the suffering of the past – that endured by one’s own people and that inflicted on others – and offers vital insights into the complex function of ‘public memory’, and the ways in which new narratives and new identities are forged. It should serve as a useful guide to the still-ticklish problems faced by those modern societies that are making the difficult transition from dictatorship to democracy.
Posted by historian at large at 02:58 No comments: 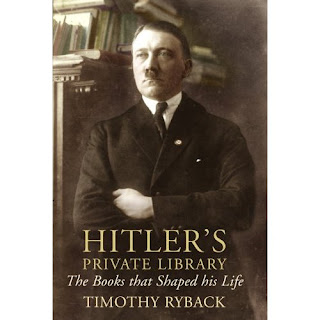 I was most interested by this publication. So much so that I actively (and vainly) tried to secure a review for it (I usually let the lit eds suggest titles to me)...

It is a curious subject, and it is one which is based on two ideas. The first is the strange fascination that anyone conscious of history would have in reading or handling one of Adolf Hitler's own books. I have had a similar experience in the National Archives in London, where I have handled original documents signed by Winston Churchill (a scrawled and interlinked WSC, if you are interested). One gets a tremendous buzz from it, I can tell you.

In Ryback's example, he is not above milking this particular thrill. He speaks repeatedly about Hitler's marginal notes, lines and exclamation marks, and most spectacularly, he claims that in one instance, he opened one of Hitler's books and a black, inch-long mustache hair fell out into his lap. This, however, though momentarily thrilling, is a bit of a one-trick-pony - it needs something more substantial to make the book work.

He finds his second raison d'écrire in the more cerebral - and indeed more tenuous - idea that one can read something into the individual by looking at his library. There are some problems with this. For one thing, marginalia can betray alot of things, but do they make the man? I think not and would indeed be horrified if someone - decades hence - tried to draw conclusions about me by looking at the volumes and marginal notes from my library. For another, Ryback only had access to a fraction of the estimated 16,000 books that Hitler was said to have owned - his conclusions surely can only be similarly fragmentary.

Yet, those caveats aside, Ryback's book is interesting. It is clearly meticulously researched and is well written. He ranges chronologically, taking a single volume of the library on which to hang each chapter, and through which to relate each episode of Hitler's life. He makes a number of enlightening diversions, and draws conclusions that are sensible and interesting, though hardly earth-shattering.

Hitler - Ryback tells us - was a voracious reader, often consuming a book a night. Moreover, he concludes that Hitler was not someone who allowed books to influence him unduly - rather, he took from his reading those facts and arguments that served to bolster and complement his existing opinions and prejudices. A good point perhaps, but hardly revolutionary, hardly rewriting history. And, if one recalls that most teachers and social workers read The Guardian and most former Brigadiers take The Daily Telegraph, one might concede that this is actually a more common failing than many of us would care to admit.

"Hitler's Private Library" is an engaging read, therefore, but it is based on some pretty thin foundations; both philosophically and materially. Ryback has done well to spin a book out of that meagre fare, but he sadly struggles to say much of any value or insight in the process.
Posted by historian at large at 08:59 No comments: