Hacksaw Ridge - a hurrah for the forgotten heroes of war 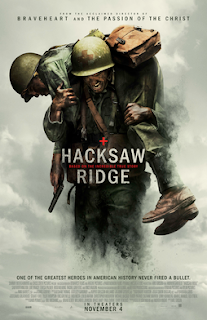 My grandfather - Capt. Stanley Millar - was in the RAMC (Royal Army Medical Corps) during World War Two.  Already a GP before the war, he joined up in 1939 and served right the way through - France 1940, North Africa, Italy, and back into France in 1944.  I've often idly wondered what it must have been like for him; patching up all those injured young men, agonizing over those that he couldn't save.  However, sadly for me - as I suspect for most of us - the role of army medics is one that gets so little air time in the conventional narrative, that it is often hard to imagine what they went through.

That said, I don't imagine for a moment that my grandfather went through anything like the horrors experienced by the subject of the new film "Hacksaw Ridge".  Set mostly during the battle for Okinawa during World War Two, the film tells the true story of Desmond Doss; a young, Virginian, Seventh Day Adventist, who joins up out of patriotic fervour after Pearl Harbor, only to discover that his devout faith forbids him from handling a weapon.

After much wrangling with the military authorities, Doss qualifies as a combat medic with the 77th Infantry Division; thereby squaring his faith with his desire to serve his country.  What followed would have made lesser men wish they had stayed at home.  In real life, Doss served in the Philippines and on Guam, but the film jumps straight to his service in the Battle for Okinawa in the summer of 1945 - specifically to the battle for the Maeda escarpment; known to the Americans as "Hacksaw Ridge".

As one might expect, the battle scenes in the film are not for the faint of heart - they are graphic, visceral and extremely brutal.  Throughout, however, the unarmed Private Doss (played brilliantly by Andrew Garfield) scampers around the battlefield saved those that can be saved.  Most impressively, after a Japanese counter-attack forces the Americans off the ridge, he stays behind - risking certain death if discovered - to tend to the remaining wounded.  In this way, it is estimated that Doss saved some 75 American lives, including that of his commanding officer, before he was himself injured and evacuated.

Hacksaw Ridge is a quite astonishing film, which gives us a rare glimpse into the horrors experienced by the forgotten heroes of the medical corps - men who went into battle with the task of saving lives when all around are trying to take them.  The film ends with the - now rather commonplace - film footage of interviews with the real-life characters.  You will not leave the cinema dry-eyed.

In recognition of his actions, Doss was awarded the Medal of Honor in 1945 - the first conscientious objector to be so honoured.  He died in 2006.
And, what of Stanley?  He came home from the war, but was evidently never the same man he had once been.  He started drinking, was struck off, got divorced and ended up taking his own life in 1973.