Germans are proud again - and a good thing too.

So, the Daily Mail tells us that the Germans are no longer ashamed of themselves and are now proud of their country.
http://www.dailymail.co.uk/news/worldnews/article-1184220/Just-dont-mention-Hitler-Young-Germans-learn-fall-love-country-again.html
Even since I lived in Germany in the mid 1990s, I have always been stunned by the capacity of the German people - even those born long after the war and with no personal reason for guilt - to readily assume the burdens of earlier generations. Of course, it was drilled into them, at school and elsewhere - that overwhelming sense of collective guilt - they were presented with the Holocaust, with German war crimes, German blockheadedness and German cruelty at every turn. Not only domestically, also internationally, the Germans were constantly reminded of the crimes of their forefathers - with the Daily Mail, unsurprisingly, in the vanguard.

Unsurprising, therefore, that - for all its achievements - Germany never wrapped itself in the flag, or proclaimed a simple pride in itself. What nation in the world could have resisted such an onslaught?

Of course, it is right and proper that the German people should be reminded of their own history and of the bestial crimes committed by their forebears, but when it gets to the point that this sense of guilt transcends the generations and turns into an ongoing national sense of shame - then it has gone too far.

Thankfully, as this new survey seems to show - the German people have now shed their hair shirt. They have troops in Afghanistan, they are a full and vital member of the EU, and they are lobbying to join the UN Security Council.

There are many reasons for this. On the simplest level, the passage of time has healed many a national would, and for most of the younger generation the Third Reich is (as for the rest of us) nothing more than a fascinating period of history. But there are other reasons. Reunification, for one thing, removed one of the longest post-war political hangovers. As did the end of the Cold War. It was an unusual, but heartening, sight to see young Germans enthusiastically waving theit national flag at the World Cup in 2006.

In short, Germany has achieved what social scientists call "normalisation".

Posted by historian at large at 03:29 No comments:

Christa Schroeder - "He Was My Chief" 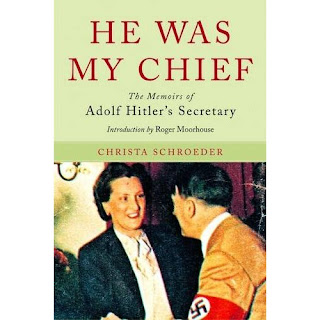 I received my advance copy of Christa Schroeder's memoir: He Was My Chief, yesterday. Its a fascinating book.

Schroeder was the most senior of Hitler's four secretaries. She had been with him from before 1933 and stayed right up to the grim end in the bunker in Berlin in 1945, and was one of the very few Germans who had the opportunity to observe Hitler close up and to chart his physical decline over the war years. As a result, she is one of the best eye-witnesses of the period, and her memoir is full of fascinating anecdotes and observations.

It was first published in Germany in the 1980s, but for some reason no English-language edition was produced until the current one. Frontline books, therefore, are to be congratulated on a real coup. I am sure that the book will be a great success.

Posted by historian at large at 00:23 No comments: 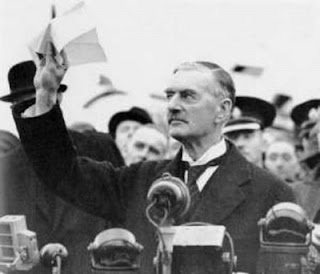 I had an interesting outing this week, to the Imperial War Museum, to take a look at the original 'piece of paper' waved by Prime Minister Neville Chamberlain when he returned from a meeting with Hitler in the autumn of 1938.

I had been asked to answer a reader's query for the BBC History Magazine about the 'piece of paper', and although I could easily have written the answer from the comfort of my desk, I thought it would be a good opportunity to see a genuine historic artefact, so I arranged to visit the Museum's archive so that I could view the document in person.

It did not disappoint. A single sheet of paper, with a government crest embossed at its head, it contains some 120 words or so, neatly typed in three paragraphs, which outline the importance of Anglo-German relations, the common resolve of both Chamberlain and Hitler that their two nations should "never go to war with one another again", and the intention that all future disagreements were to be settled by negotiation. Beneath the text, were two signatures, both now turning rather brown. 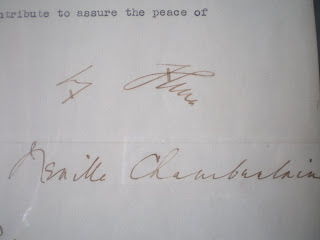 The first is Hitler's, distinctive with its anomalous vertical lines and a surname that seems to tail off to the bottom-right hand corner of the page. Interestingly, the text is still of a good size. It would deteriorate to a tiny scrawl as Hitler's myopia progressed later in the war. The second signature, that of Chamberlain, is altogether more conventional. Beneath the two, to the left side, there is a hand-written date 'September 30, 1938'.

Curiously, the document was sent direct to the Imperial War Museum in January 1940 - thereby avoiding the usual fate of all government documents, which are filed internally and then sent to the National Archive at Kew, only to be made public after 30 years. It seems that this special treatment came about because the significance of the document was immediately apparent. By January 1940, of course, Britain was once again at war with Germany, and Chamberlain's much-vaunted accord with Hitler was very much a dead letter. The note that accompanied the 'piece of paper' to the Museum alluded to this awareness, stating that whilst the document “seemed of the highest significance then … its implications are now ironical.”

The 'piece of paper' was then put on display, and remained on view until the early 1990s, when fears about its apparent deterioration caused it to be replaced by a facsimile copy. The original was then consigned to a temperature-controlled strong room within the Museum's archive.

I can't say there was any particular 'frisson' about holding the item, but it was still very exciting to have a document in my hands that was once the focus of such tremendous hope, and then of so much disappointment and despair. It also made me rather sorry that the age of such momentous papers and letters has now passed, to be replaced by the more erasable and transient medium of the email. It is highly doubtful if our descendants - 70 years from now - will see the original documentation from the run-up to the invasion of Iraq, or of Afghanistan, or indeed of many of the seminal events of our time. And that makes me rather sad - not only because the historical record will be lacking, but also because no-one will have the opportunity to hold those documents, study the signatures and enjoy the moment.

Posted by historian at large at 08:35 No comments: