Hitler and his 'charisma'

One of the most interesting developments in our understanding of Nazi Germany in recent years has been the recognition of Adolf Hitler as a charismatic ‘personality’; an apparently magnetic character instead of merely a malevolent, psychopathic void.  It is indeed a paradox that such a fundamentally dysfunctional individual - unable to form normal relationships, unable to debate rationally, unable to perform most normal social interactions - could have become a figure of adulation for so many millions of Germans. 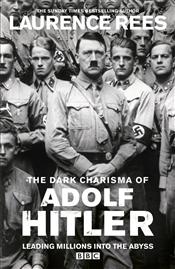 It’s a very valid question, and Laurence Rees’ new book – and the TV series that it accompanies – draws on this trend to examine Hitler’s charismatic appeal and ask how all this was possible.  Rees goes some way to providing an answer, arguing that Hitler’s rise to power was attributable – at least in part – to an unholy fusion of his own most peculiar nature and the urgent need of the German people in the inter-war years to find some sort of messiah-figure to save them from their malaise.  Germans, Rees suggests, desperately projected their political and messianic desires onto Hitler, and his arrogant, intolerant, inflexible personality appeared to confirm that he was, indeed, someone who was ‘on a mission'.  It turned out to be a marriage made in the darkest depths of Hades.

In fact, I think there are two points relating to Hitler's charisma.  On the one hand, there is what we might call Hitler's 'political charisma' - the aspect outlined above, which encompasses his undoubted sense of political 'style', his speaking manner, his dress sense, his image-consciousness - his charisma, as it was experienced by the many millions of his followers across Germany, the vast majority of whom never met the man, and never even saw him up close.  This aspect of the story Rees explains rather well.

The other aspect - that of Hitler's personal charisma - is a little more complex, and this Rees handles rather less well.  Peculiar though it may sound to our modern sensibilities, Hitler undoubtedly had a magnetic personal appeal.  This has been confirmed many times by members of his household - those that knew him best and saw him most often and, crucially, when off-duty - all of whom testified to his immense personal charm; his bourgeois manners, his sense of humour and his caring, avuncular nature towards his secretaries.

On another level, Hitler also had the knack of impressing those who visited him in his headquarters.  He tended - according to those that met him - to use his striking blue eyes to great effect, holding his gaze on a new arrival to 'test' them, for instance. Few were unmoved - Stauffenberg was one of those that found Hitler personally most unimpressive, but he was very much in the minority. In other instances, Hitler proved himself most adept at convincing his underlings of his point of view, not always by ranting and raving (though that also played a part, especially as the war turned against him), but by persuasion.  There are countless examples of military men coming to the Fuhrer-HQ urgently seeking to convince Hitler of their opinion, and coming away equally passionately convinced of Hitler's...

This is an important distinction.  If we suggest that the "political charisma" is most important in Hitler's rise to power, it is then the "personal charisma" that is surely more instrumental in keeping him there, in heading off potential rivals and critics - with ultimately disastrous effect.

This aspect of his personal charisma, I would argue, still does not get sufficient attention.  We saw a glimpse of it in the excellent German film "Downfall"- where it was almost possible - thanks to Bruno Ganz's brilliant performance - to feel sympathy for Hitler as his Reich collapsed about him.  Yet, this is still rather the exception.  It seems, perhaps, that we are still unable to acknowledge Hitler's humanity - we still prefer to see him as an 'other', someone quite apart from ourselves.  I would suggest, on the contrary, that acknowledging his humanity tends to make his crimes all the more horrendous.

Though it does not go far enough then, Rees' book is nonetheless interesting, and is a useful vehicle for many of the first-hand accounts from eye-witnesses and participants that he has collected over his years as a TV documentary film-maker.  Consequently, there are numerous interesting contributions from ordinary Germans; those transfixed by a Hitler speech or perhaps unnerved by his piercing blue eyes or his unblinking stare.

But the book feels padded and overlong.  And, with other venerable Hitler volumes available, I would suggest that this subject would have been better treated in a shorter, more essayistic style, rather than producing yet another full-length narrative. It is also curious that the book comes to a rather abrupt halt, covering the last two years or so of the war in a final, breathless chapter, despite this being a time when – as Ian Kershaw has convincingly shown – it was Hitler’s charismatic leadership that was largely instrumental in keeping the Third Reich fighting to the bitter end.  Perhaps this is where Rees reveals his blindspot - Hitler's "personal charisma".

Hitler was undoubtedly charismatic, and this is an aspect of the story of the Third Reich that is well-worth examining in some detail.  Unfortunately, however, Rees’ book does not quite do the job well or coherently enough.  It is too long, too unfocused and too obviously a TV tie-in.  There is certainly a book to be written on Hitler’s charismatic aspect – but, sadly, this isn’t it.

(this is an extended version of the review that appeared in the Independent on Sunday: 14.10.2012)
Posted by historian at large at 03:15