The Reichstag Fire - an end to the controversy...?

When the German parliament building in Berlin - the Reichstag - caught fire shortly after 9pm on the evening of 27th February 1933, it marked the beginning of a lengthy controversy. Already that same night, in the Reichstag building itself, Nazi authorities picked up a young Dutch communist named Marinus van der Lubbe, who had apparently been caught red-handed setting the fire.  Upon his arrest, it was said, he was asked why he had done it.  He answered: "Protest! Protest!" 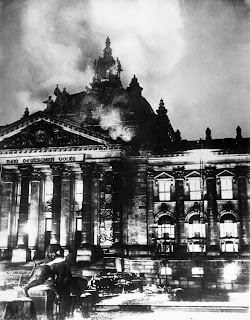 Despite this apparently copper-bottomed case, many of the opponents of the Nazis - especially on the political left - were swiftly proclaiming the fire to be an archetypal 'false flag' operation; an arson attack carried out by the Nazis themselves, to be pinned onto their opponents.

This hypothesis had two primary foundations: the first was the so-called 'Oberfohren Memorandum' - a selection of circumstantial evidence collected at the time and later expanded and published as the "Brown Book", which pointed to the Nazis as the culprits.

The second was based on the principle of "Cui bono?" - 'who benefits?'.  Given that the Nazis clearly benefited enormously from the fire - in that by foreshadowing a communist rising it eased their passage of laws clamping down on the left in particular and on civil rights in general - it seemed plausible to suggest that they must have started it themselves.  This line was very popular outside Germany during the war, was presented at the Nuremberg Trials in 1946 and has long held currency.  Indeed, when Georg Elser attempted to assassinate Hitler in Munich in 1939, many on the left immediately branded the near miss as "a second Reichstag Fire" - that is, a attack orchestrated by the Nazis themselves for their own political benefit.

This controversy rumbled on through the post-war years, bursting into life occasionally as new 'documents' came to light and the German press interested itself once again.  In fact it almost became another mini 'Historikerstreit', except that, in this case, most of the serious historians tended to be on one side of the argument.

A recent book by Berlin historian Sven Felix Kellerhoff has now arguably put the story to bed for the last time. "Der Reichstagsbrand" (The Reichstag Fire) is only short, at about 160 pages, but provides a punchy, readable account of the case itself as well as its curious afterlife, and benefits from official documents released following German reunification in 1989.

Kellerhof is clear in his conclusions.  Van der Lubbe was the lone culprit, setting the fire himself, intending it to provide the spark for a communist rising against the Nazis. As he concludes, there is not a shred of evidence that the Nazis committed the crime, indeed it seems that Hitler initially feared that the fire would be a hindrance to him rather than a help, and it was Alfred Hugenberg, rather than Hitler, who first advocated clamping down on the Communists in response.

The case against the Nazis, Kellerhoff argues, is a confection of circumstantial evidence, misunderstandings, forgeries and politically motivated conspiracy theories, which merits little serious consideration.  The fact that the Nazis were the main beneficiaries from the crime - and Hitler's exploitation of the Fire was certainly a virtuoso performance - should not blind us to the fact that he and they were not the authors of it. Far from providing an explanation, 'Cui Bono', in this case, merely leads us down a blind alley of conspiracist nonsense, involving secret tunnels into the Reichstag, and a mystery team of SA arsonists, who were in turn bumped off during the Roehm Purge in 1934.

Most tellingly, I think, it seems that - in continuing to pin the crime on the Nazis - we are in danger of attributing far too much Machiavellian cunning to them and by extension to Hitler - and in so doing, we are guilty of a perverse mirror image of the totalitarian cult of personality.  If we assume that Hitler had all the strings in his hands in February 1933; that he and his minions were able to burn down a major public building in the German capital, pin the crime on an innocent communist, do away with the real culprits, and cover up the entire story - then surely we are ascribing talents to Hitler and the Nazis that were way beyond their real abilities.  A generation of Germans might have wished that Hitler really was possessed of such diabolical cunning as to be capable of such things, as it would - in part - absolve them of their complicity in following him, pied-piper-like, into the abyss.  But it is simply not plausible.

Van der Lubbe, it seems, really was guilty of setting the Reichstag fire himself, unaided.  Perhaps now, with the benefit of 8 decades of hindsight, we can all accept that to be the most likely conclusion to this story.

What do you think about the position of the historian Herman Graml? He says there are no enough evidences that Lubbe is the sole perpetrator as well as that the Nazis were the perpetrators.(?!?)

Van der Lubbe, who already had a criminal record, has attempted a several times earlier to arson different buildings in order to protest against the German government. He had been caught with “flammable materials”, “sweating” and “breathing heavily” during his interrogation as if he just came from the crime scene. Lubbe’s behaviour during his interrogation and his items he was carrying with him clearly show that he had to do something with the Fire. Why otherwise would he have carried around flammable materials on that particular day? Furthermore Kellerhof supports the theory of van der Lubbe being solely responsible for the fire as an own initiative to protest against the German system. He claims that a few flammable materials would have been enough to conduct the fire in the Reichstag alone, as the breaking of the glass of the dome of the Reichstag encouraged the contact between fire and oxygen, spreading the fire even more. This is also supported by Dr. Walter Zirpnis claiming at the Nuremberg trials that van der Lubbe acted by himself.