The Estonian film "1944" was released to huge acclaim in 2015 and was submitted as that country's entry for the 2015 Academy Awards as best foreign film, has now been released in the UK (with subtitles), under the title "1944 - Forced to Fight". 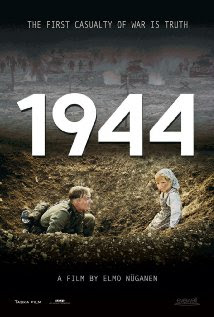 It is set against the backdrop of Estonia's unenviable fate during World War Two, stuck as it was between the rock of Nazi Germany and the unmovable object of Stalin's Soviet Union.  Those that have read my book "The Devils' Alliance" will know some of the horrors endured by the Baltic States during this period.  For the uninitiated, a thumbnail sketch: this was a time in which is was quite possible for a single family to have parents exiled to Siberia by Stalin in 1940, have an elder son drafted into the Red Army the same year, and a younger son conscripted into the Waffen-SS in 1944.  On our comfortable little island, with its clear moral narrative of World War Two, such complexities can be hard to fathom.

Yet, "1944 - Forced to Fight" explains them very ably and succinctly.  It focuses on two individual soldiers - Karl Tammik and Juri Jõgi - who find themselves on either side of that divide; one fighting for the Germans, one for the Soviets.  Like most of their countrymen, neither shows any particular ideological fervour, except the desire to escape the madness and go home.  Their story plays out during a few months of the Red Army's advance into Estonia - between the Battle of the Tannenberg Line and the fighting on the island of Saaremaa - in the late summer and autumn of 1944.

I won't spoil the story for readers by giving away the narrative strands that link the two principal characters, but suffice it to say that the film is one of the best World War Two films I have seen.  It is well acted - with excellent characterisation (even through the medium of subtitles), the combat scenes are as riveting and harrowing as they are authentic, and the central narrative brilliantly displays the impossible predicament that the people of Estonia - and their Baltic neighbours - found themselves in during the war.

Just out of interest where did you get this movie.. is it available on Netflix or Amazon or did you go and buy it?

It is available via Sky.

You can buy it or rent it from an Amazon Love film subscription. Amazon Love Film in the UK seem excellent for "Foreign" films, including many on WW2.

My name is Fernando Augusto Pacheco (fp@monocle.com) one of the producer at Monocle 24

We are looking to contact you to join us on our evening radio show to talk about a story. I wonder if you would be ok to e-mail me so I can give you all the details. Its about Hershel Grynszpan picture .

It is very helpful for me. Keep blogging like this.

US IT Staffing Agency

Welcome to our VIP Escorts In Lahore and we are happy that you are selecting us for getting your administration of Escorts in Lahore. One thing we can guarantee you that you won't lament taking our administration.